Looking to buy a good TV set? Vizio is a good brand that promises several features such as good image quality, affordability, and cool features. But with several different series and models on offer, you will be spoilt for options.

Choosing between different TV brands is hard enough; it can be even more confusing when choosing from the same one. However, by comparing different options, you can be able to find the one that suits you best. 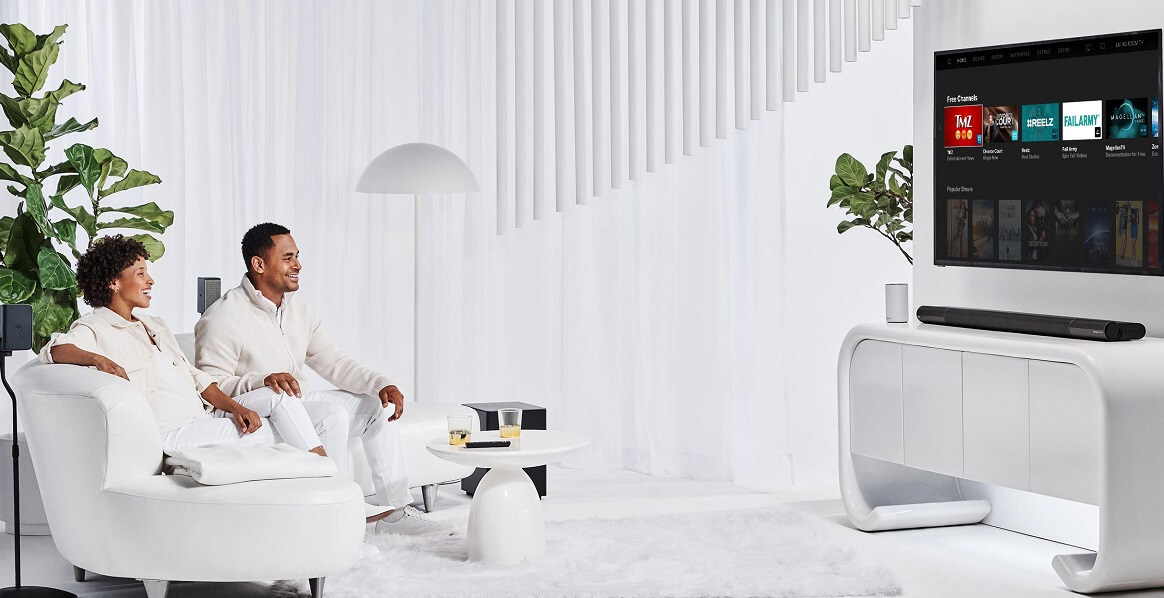 Like many TV brands, Vizio offers a variety of series and models, giving customers plenty of options. Here is a list of all Vizio TV series in alphabetical order:

While doing research for this Vizio TV series comparison, we encountered several similarities. After all, they are designed by the same brand.

Some of these similar features and specifications include:

One huge similarity across most Vizio TV series is the design. Most of the series come with a thin, shiny black frame (with a few series sporting a grey frame.

The thin design, combined with the black frame helps to give the appearance of an all-out screen.

Vizio TV series also features a similar back frame and panel. While still relatively small in size, it is larger than most thin TV sets and is quite visible from the sides.

Another similar design feature is the pedestal stand. This is available in all series aside from OLED and P series.

Another similarity is the use of local dimming technology, where parts of the screen showing black are dimmed. This allows the TV sets to produce darker black images, thus creating better contrast, and consequently, better images.

SEE ALSO:  How to turn off narrator on Vizio Smart TV

There are two main backlighting technologies when it comes to TVs: LCD (liquid crystal display) and LED (light-emitting diodes).

The Vizio TV brand uses LED backlighting technology for its TV sets. This makes the televisions more energy-efficient, not to mention better in image quality and performance.

Despite these similarities, there are several differences between various Vizio TV series.

While the designs across various Vizio TV series are similar, they also come with distinctive differences.

A comparison by year of the same or different series highlights differences in various areas such as the thickness of the frame size and the back panel.

For example, newer models have thinner frames and back panels, which gives the TV sets a visually pleasing slim and neater design.

Other design differences include different visual patterns on the stands or the use of single stands instead of pedestal ones.

Resolution is another distinctive difference across Vizio TV series. Earlier TV sets have lower resolutions, 720p and 1080p, while newer ones come with the newer and more advanced 2K and 4K display.

The difference in resolution is not just between different series, it also occurs across different models in the same series.

While LED backlighting is common across all series, there are varying differences in how it is used. For example, the Vizio OLED series uses organic LED backlighting, as opposed to standard LEDs.

Backlight dimming technology is also different across various series. Newer series (and models) have more dimming zones compared to the older ones. As a result, they can produce better images.

If you rank Vizio TV series in order of year, you will find that they have similar styles, but different picture quality. This is due to the use of varying imaging technologies.

For example, when it comes to HDR, older TV series and models use HDR 10, while newer ones use the more advanced HDR 10+.

Another example is the use of the IQ Ultra processor in the new Vizio TV series for better-quality images and sound.

What is the best Vizio TV series?

SEE ALSO:  How to fix Vizio TV HDMI ports that are not working

The Vizio P Series is the flagship series of the brand, thanks to its sleek design and excellent picture quality.

It comes with an ultra-thin frame, where the top and sides are black in color and are equipped with edge-to-edge glass. The effect is a sleek, stylish design that seems to float in the air.

Aside from the design, the series employs a horde of imaging features that over-the-top picture quality. To start with, it makes use of 4K Ultra resolution, thus guaranteeing crisp, clear pictures.

Additionally, they are equipped with the advanced HDR10/HDR10+ and Dolby Vision technologies, that guarantee smooth, clear pictures.

The Vizio V series is a budget-friendly option, which offers a great balance between price, performance, and picture quality.

The various models in this group are equipped with up to 4K Ultra HD resolution, which guarantees great picture quality. They also come with Dolby Vision, which enhances the brightness, color, and contrast to make the images livelier.

Being a budget-friendly option, the series lacks advanced features such as Full Array Local Dimming, color gamut, and others.

However, the image quality is decent enough to give it an edge against other TVs in the same price gap. On top of that, Vizio more than makes up for this with top features such as a Smart Cast and a gaming engine.

The Vizio M Series is another budget-friendly option, but it is also equipped with excellent performance and image quality.

They are also very stylish, with thin frames, black sides and top, and edge-to-edge glass that gives an all-out, floating screen appearance.

When it comes to the picture quality, the models under this series go up to 4K Ultra HD resolution. They are also equipped with Dolby Vision and HDR technologies, which deliver even more amazing images.

On top of that, the M series comes with local dimming technology and features up to 90 dimming zones. They also feature IQ Active picture engine, as well as Quantum Color Spectrum that helps to brighten images.

No! The V series is offered as a step-up of the older Vizio D and E series. Therefore, the models under the V series have better features.

For example, when it comes to image features, the V series is equipped with both HDR10 and Dolby Vision, while the latter lacks in the D series.

Another distinctive difference has to do with the refresh rate, which can have a significant impact on picture quality. On the D series, the refresh rate is only up to 60Hz, while with V series, it goes up to 120 Hz.

Therefore, when choosing between the two, you will find that V series models are offered at a higher price. This is the case even for similar screen sizes produced in the same year.

What is the difference between Vizio M Series and V Series?

Despite being somewhat similar, you will notice several differences when comparing Vizio V Series Vs M Series. These include:

Which Vizio TV should I buy?

If you are looking for a high-end Vizio TV, go for the P-Series. However, if this is above your budget, the OLED or M-Series are great alternatives.

If your budget is below $1,000, go for the V or D-Series. It is worth noting that some earlier models of the M-Series also retail for a price that is almost similar to the V-Series.

Looking to purchase a Vizio TV? The above is a look at various TV series offered by the brand, their similarities, and differences.

From budget-friendly options to mid-range and high-end options, Vizio has lots of options for you to consider. So, whatever you are looking for, you can be sure to find a TV that meets your needs.